As the SKWAWKBOX covered on Thursday, a singleweek of General Election campaigning – with Corbyn taking the streets by storm and Theresa May hiding in empty factories or speaking to a handful of acolytes in strictly stage-managed settings – saw the Tories’ polling lead over Labour fall by a huge eight points.

Today a new poll, announced just minutes ago by Britain Elects, shows a further fall – from 16 percentage points to 11 – in just two days: 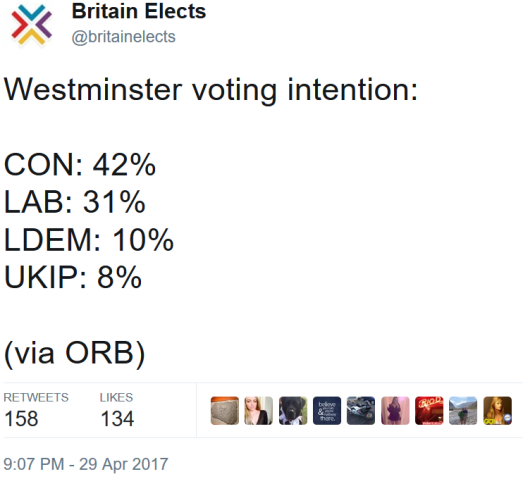 Clearly the voting public is starting to recognise in Corbyn an authentic Prime Minister in waiting when they see one – and to see through Theresa May’s media-spun ’emperor’s new clothes’ to the unfit, unelected has-been behind the spin.

It seems all the momentum is Corbyn’s and Labour’s.

The battle is just beginning, but it’s becoming clearer every day just why Theresa May’s keepers are keeping her out…

This site uses Akismet to reduce spam. Learn how your comment data is processed.