This is the first blog post I have made about a #TwitterStorm because I feel it is that important and Iain Duncan Smith must pay for his incompetency not only over his inactions over the #DWPDeaths but a host of other reasons too, he is a danger to us all.

So this is a call out for Unity and many new faces to join us on Saturday 29th August @ 7pm for a #TwitterStorm, lets make our feelings known via Press and Media that this inhuman is no long needed or wanted and time is now for him to fall on that sword he has been swinging for the last 5+ years 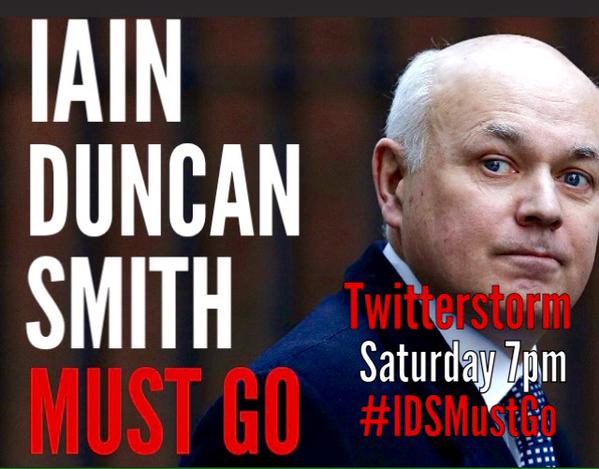 I watched your Statement on SkyNews today in regards to infiltration of Leadership vote and whilst I agreed with what you had to say if that was indeed what was happening I can assure you that is not the case and innocents are being denied their vote.

One such person of many more is Jayne Linney, she had an email revoking her just vote.

She is a strong supporter of the Labour Party who does uphold the principals and values of it, so much so she was a past member but revoked that membership due to issues at local level, however that does not mean she does not support the broad aim of it, indeed she still remained a supporter and voted as such and never turned to another party.

Many have been disillusional of Labour of late that does not mean they have totally turned their backs on the party far from it and as the support for Mr Corbyn shows and which Labour must embrace.

Jayne Linney has fought hard for some of the most marginalised in Society, she is exactly the person the Labour Party should appeal too and for that reason I ask you to look into this and reinstate her vote as mistakes are being made.

This is the letter I sent to Iain McNicol this morning as I too have received my email denying me my vote!

As a previous Labour Member who didn’t renew my membership due to concerns with actions by my local Labour Party and what I perceived as a lack of opposition from the Parliamentary group, I maintained my belief in Labour’s aims and values.

Given this I willingly paid my £3.00, which I can ill afford as a disabled benefit recipient, to become an Affiliated Supporter and vote for my preferred candidate in the Leadership campaign.Upon receiving my electronic ballot paper I immediately duly voted but today I received an email informing me my vote will not be counted?

The recent revelations surrounding the supposed ‘training‘ given to DWP staff on what to do if a recipient says they’re going to self-harm or commit suicide is simply passing the blame onto people that are unprepared, untrained and unqualified. They shouldn’t be dealing with such delicate circumstances, we are talking about human life here, people that are in such horrific circumstances that need genuine and useful help and support, but are being shunned and abandoned.

It also isn’t just the wellbeing of welfare recipients but also of the DWP staff, people that are only trying to get on in…

I have been following your leadership campaign closely on social media and you have ignited that spark in politics to the point were I have never been so excited and thus cling on to the hope that you will win and may I say by a landslide will be even better.

I note that you have a rally in my area at the Hilton at the Ageas Bowl Southampton on the 25th August 2015 to which I have accepted your RSVP and look forward to that very much.

I have voted for you as only you offer everything that appeals to me, you see I do not make my decision on age, race or gender but on what each candidate has to offer in way of policy ideas I also totally discount what the right wing say as you not being a future Prime Minister as I believe that will be decided in the coming years as to how you perform as leader and the policies you put forward for that term as PM, indeed quite simply it is no ones place to make such assumptions.

The Tories have no moral compass they are devoid of any understanding, compassion or empathy of citizens they proclaim to represent and believe that business and corporates are the be all and the key to prosperity I believe that is far from the case and is at loggerheads with the very fabric of society were everyone gets a fair chance. They will tell you no regulation is needed but the fact is with no regulation the banks and corporates have been aloud to run fast and lose without a care for consumers, but it is ironic without those consumers they are nothing.

GREED IS THE EVIL OF US ALL AND MUST STOP

I no longer work or rather I do and more harder than many but you see it is not recognised as work and is poorly paid for the effort I put in, you see I am a full time carer for my mum in law who among other illnesses and diseases has alzheimers added to this I am also an SAH/Stroke Survivor I say Survivor because my brain bleed was 25 years ago but have none the less been left with both mental and physical disabilities witch despite what IDS and the defunct DWP say is a lifelong illness, I have long accepted this fate dealt to me but what a shame that this current Govt have not.

Despite my SAH/Stroke I was not one to remain in a wheelchair so fought hard with physiotherapy after 3 months in an induced coma to get myself as fit as possible and back to work, this I achieved 18 months later and managed to stay in fulltime work until the hight of the global banking crash in 2007/08 where I was made redundant.

Do you remember David Cameron saying that no one should claim benefits unless they have a real need? well I think my need is real but despite that I never claimed any DLA from my return to work in 1992 until my redundancy in 2007 my mistake and perhaps I was a fool but my reasoning was that I was earning enough and paying my dues and thought it would be better needed when the time comes that I cannot work so in effect saved the Govt shed loads before Cameron even made that bold statement.

DLA care at the middle rate is now all I get and is my only income besides my wife’s part time earnings although to her bless her it does not feel part time with what she does at home too!

Now getting further work was going to be harder for me in the labour market due to walking with a gait, having a dysfunctional claw right hand etc but I tried none the less and managed to get agency work for 12 months until that dried up too so discussion was needed with my wife and family on what to do.

It was decided that I take over the caring my wife did for her mum and she increased her hours at work from 15 to 30 hours although that triggered her losing carers allowance.

Can you see the constant juggling we have to do in order to stay within the law set by Govt while they carry on raping public funds in expenses glad you are not one of those either by the way.

Since Cameron’s Austerity War on citizens we have suffered as a family unit in many ways from housing my older son his partner and their son to supporting my younger son whilst he was treated very poorly by #JobSanctionPlus as I refer to them, he was sanctioned in his second week for missing an appointment which was an appointment they changed and the letter never got here in time they was brutal and reduced my son to tears in the end he said sod them and signed off and went about getting a job himself which he did do 4 weeks later in the field of music which was his aim and is a very good guitar player but we will always have that burning question why couldn’t DWP have supported him for those few weeks after all as has been proved with his music qualifications and knowledge it was not going to take him that long.

We as a family are not scroungers or any other derogatory word this Govt care to use but like many families have a unique set of circumstances that a bit of support would have gone a long way but this Govt is devoid of any compassion understanding or empathy and is causing a great waste.

As for our mother we love her to bits and would go to hell and earth to do anything for her but none the less is a strain on our marriage and thus we long the day for a few hours on our own but the care for her is not their for us to do that so we carry on as we are as it is better than another costly care bill for Govt.

Anyway as you can see we long for a new direction where everyone is equal everyone is included and where the conditions are right for me to ease back in to work again.

I believe time is right to end this Tory doom and gloom to everyone’s lives I believe it can be done we are one of the richest nations on this planet after all with great skills to take us forward and I believe you are the man to do it.

Further to my post yesterday in regards to the ex service man who was outside Asda Cambridge with a sign asking for help, he was again there today and was kind enough to let me photograph his sign. He told me he was staying on Coldhams Lane in a shelter and has been for a while. We chatted again and he showed me his horrific wound scars and I mentioned that I put his plight on facebook and he said others had as well. I also told him of the help available and he said he is onto it. I have said that if he is there tomorrow I’ll give him the details some of you have kindly given me. Please share both of the statuses to help raise awareness of this disgusting situation.

I can no longer go along with “better”, I want Labour to offer “different”

Labour’s establishment, is focused on making Labour re-electable as a government. Power matters more than ideology because after all what is the point of being ideologically sound but never having power? Surely any Labour government would be better than a Tory one? Power is the only thing that enables Labour to make a difference to the lives of the people who support it.

That’s the deal that has been offered to the party’s left-wing for years. Tread water on a socialist agenda in exchange for a united party that can achieve power to make people’s lives better. As a left winger, I bought this deal in the 1990s. Me and many others like me parked our socialism to go along with the New Labour project. And the Labour governments from 1997 did enact a number of…