This Company was first given a contract in 1997 and  given a new contract in 2005 by Labour to carry out the WCA to get those it felt were left on the scrap heap of Incapacity Benefit when the Tories were in power to fudge the unemployment figures under Thatcher. Well the amount of stuff since then has been mind-boggling and I have followed all the stuff I could  since the Coalition got into power to investigate who and what this company were about. In this blog I am going to attempt to put it all together in some sort of order, but  it may not be in chronological order . I will post links and also a Dropbox link to enable readers to access documents.

This will be a very long blog. 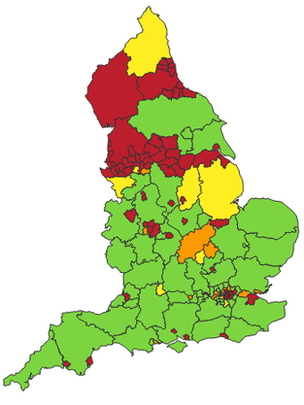 The red areas are doing significantly worse than the national average (source: BBC)

Today, the BBC is reporting on this: “Longer Lives” – you can find the report here. The aim of this post is to identify how the UK elite report on this with a particular emphasis on what they have failed to include. So let’s start with the BBC’s report first:-

The local variation in early death rates revealed in a new league table for England is “shocking” and must drive action to improve health, Health Secretary Jeremy Hunt has said.

Mr Hunt said the data could be used to tackle smoking, drinking and obesity.

Labour called for a “One Nation approach” to end health inequalities.